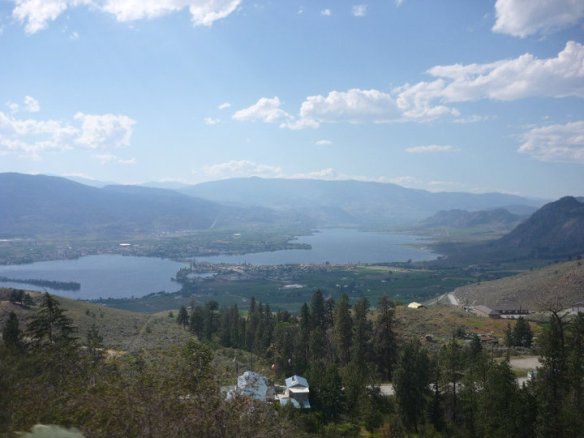 If I’d taken this photo of Osoyoos, British Columbia facing to the left, you’d be able to see the border and into Washington state!

“The  proper means of increasing the love we bear our native country is to reside for some time in a foreign one.“ ~ William Shenstone

For nearly a year now, I have been living and teaching in Australia. I figured it would be a relatively easy transition – both English-speaking once-upon-a-time British colonies with the Queen still gracing the backside of our currencies and we both spell the same* – ish. I should have felt a connection to this place and this country, shouldn’t I have? A sense of history and home? My time here has exposed me to beautiful and not beautiful places, helpful and not helpful people, inspirational and discouraging experiences; rather than enhancing my connection and love to Australia and the Commonwealth, it has instead strengthened my love for Canada, and as it turns out, the United States as well.

The inklings of this realization** began to surface during the London Summer Olympics (see below) and continued to build through the second half of my exchange.

Here is the revival of my summer/winter post when my “Continental Patriotism” began:

This morning I put on the London 2012 Summer Olympics – that in itself is strange. I have seen more of the summer Olympics this year than any other for two reasons – 1) I’m usually outside suntanning, swimming, beaching, etc, rather than inside at the television and 2) Canadians aren’t nearly as strong in the summer Olympic sports as they are in the winter. The next oddity made me actually stop what I was doing and wonder what had just happened: I heard the name “Michael Phelps” from the commentators, got really excited, and hoped he’d win. Wait a minute….he’s American.

Now, I wouldn’t call myself anti-American – I don’t feel insulted, angry, or disgruntled when the Australians that I talk to ask if I am American. I do, of course, correct them and explain that I am Canadian. But, I don’t begrudge the error – I, still, would not correctly distinguish Aussie from Kiwi and can only occasionally guess Brit vs. Aussie. Heck, if I met a North American traveller I couldn’t tell you Canadian or American…unless they were from Newfoundland, Boston, or the deep south. And even then? Maybe not.

Back to the Olympics though…after my initial excitement at the prospect of an American winning this gold medal I thought back to my past Olympic medal thoughts. Previously, in any event, at any competition, I would prefer ANY country win medals than the USA. Not because I don’t like the US, but because they just get so many. As would be expected – they have a HUGE population from which to select talent. As for Canada vs. America medals hopes – so often it seems that Canada is the shy, meek, push-over, weak, polite, needs-a-pat-on-the-head, sniffling, snot-nosed, sickly little brother of the US. (Yes, I recognize the redundancy of those adjectives and included them all just the same). So, it sorta feels like a little bit of a “SEE, we CAN beat our big, strong, overbearing, powerful big brother at some things,” SO THERE moment when Canada succeeds over America for a medal. It’s rare, so it’s relished.

As I’ve watched and listened to snippets of the games, I thought I’d be inclined to cheer for Canada and Australia, my adopted home for the year. So this morning’s cheer for the US really surprised me. Oh, what the familiarity of “home” can do for a person a million miles from it. So, while I’ve never cheered for the United States in the Olympics before, I think I will this year. Go NORTH AMERICA!

Back to the present: Time, visitors, questions, experiences and a 78-second Google search has brought me to the conclusion that Canada is not a colony of Britain (I learned we were already exerting efforts to pull away as early as 1791). Canada is not the snivelly apologizing** little brother of the United States. Also, Canada is not the fraternal twin sister of Australia (whose Wikipedia page suggests a much stronger connection to the UK) as many, including myself, may have once thought.

Canada IS, however, a country that is home to well over 100 First Nations groups; boasts two official languages; has developed from a rich French and British history (along with many other European influences); is comprised of families that speak nearly 100 different languages (I got tired of counting); has strong economic, tourism, and geographic ties to its neighbour*** to the south. Canada is just one crazy big mix of everything and anything. Canadica has the potential to be even better .

North America is  a powerful, large, successful, rich (in ways more important than money), spacious, beautiful, and so on and on and on, continent. Maybe it’s time we stopped competing to be better than the other. America will always be “best” in some areas. Canada will always be “best” in others. Why not start learning from each other, complementing each others’ strengths and weaknesses, and make North America the best CONTINENT to live rather than one or the other being the best COUNTRY?

*…only sometimes, as it turns out

**American spellings use “zed” (Canadian pronunciation) in many words that British spelling would use “ess,” ie., realise, organise, surprize (just kidding on that one), etc.

***British spellings include a “U” occasionally (neighbour, harbour, honour) and “re” at the ends of words like metre, centre, calibre, etc.

There was talk in Wendy’s post two weeks ago regarding spicing up Canada’s national anthem. I enjoy her pick, and also propose Big Sugar’s rendition of the original that should be played regularly. Unfortunately, I am not technologically skilled enough to know how to share an MP4 file on here, so I’ve put the song into a Powerpoint – Click the link below and view the slideshow to hear the song. Or, leave a comment about how to do it a better way!

“The love of one’s country is a splendid thing. But why  should love stop at the border?” ~ Pablo Casals

Kimberly Cave is passionate about teaching, reading, psychology, laughter, and life! She has aspirations to be a writer and an Isagenix Consultant! Check out her Cave Down Under travel blog or her randomly personal blog at Kimberly’s Cave. Honoured to be featured on Canadica! 😀